Difference between revisions of "Jim Woodring" 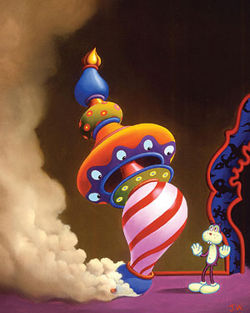 Jim Woodring was born in Los Angeles in 1952 and enjoyed a childhood made interesting by frequent hallucinations, apparitions, disembodied voices and other psychological malfunctions.

Despite the generally frightening nature of his delusions he learned to accept them as part of life and was accordingly a reasonably cheerful and good-natured lad.

After barely graduating from high school Woodring got a job as a garbage man and lived in picturesque squalor as he set about the task of capturing his inner life in words and pictures.

Some of these fledgling efforts were printed in various “underground” publications of the day: Two-Bit Comics (a weekly tabloid), the Los Angeles Free Press, and an early effort at self-publishing, The Little Swimmer.

Jim was subsequently published as a 32-page magazine by Fantagraphics Books. Response was good enough to persuade Woodring to leave animation and embark on a career as a full-time cartoon artiste.

He now lives in Seattle with his family and residual phenomena.

These are toys designed by Jim.

These are toys Jim has lent his design skills to.

These are one-off pieces by Jim.