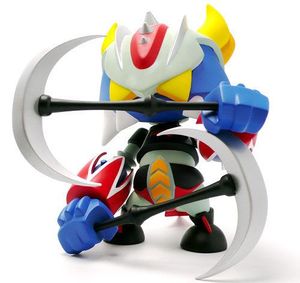 Mist, born in Paris in 1972, discovered "graffiti art" in 1988 on his way to school, where he studied design during 4 years. He then learned sculpting in a collectible figures company during one year. During the same period, he joined the COP (Control of Paris) crew in 1992 and painted many walls with his partner Steph (creator of the Imaginary Friendz collection). Fascinated by Wild Style letters, he also started to develop his own character style.

These are toys designed by Mist.

These are toys Mist has lent their design skills to.

These are one-off pieces by Mist.