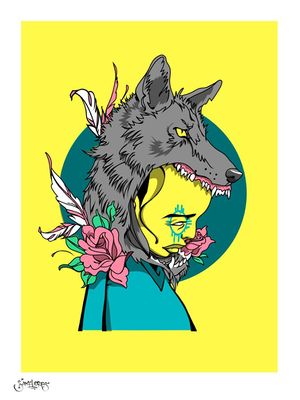 Sam Flores was born in 1975, immersed in the stark beauty of the New Mexico desert. In 1995, he moved to San Francisco seeking life as working artist and the Bohemian lifestyle of the Bay Area. Like most teens of the late 80's and early 90's, Sam was involved in street cultures of skateboarding and graffiti writing. From 1995-1998, these roots in urban expression helped him land freelance gigs doing graphics for Adrenalin skateboards and Civilian clothing. He's shown at Virgin 69, 5024, and Hotel Biron galleries, as well as traveling shows to New York, Canada, Singapore, Tokyo and throughout Europe.

His focal medium is paint on maps, blue prints and canvas. These paintings touch classic themes of "natural beauty," which is in obvious contrast to his life in the urban landscape. He credits Michael Parkes and Derek Hess as influences. The rich flora of his recent work can be compared to the nouveau stylings of Alphonse Mucha. His figures tend to be somewhat anonymous, even masked in some instances, yet still full of personality and emotion.

He effortlessly combines broad fields of color and finely rendered detail, creating paintings that are engaged on many levels. This palette tends to lean toward earth tones, perhaps an homage to the colors of his youth in New Mexico.