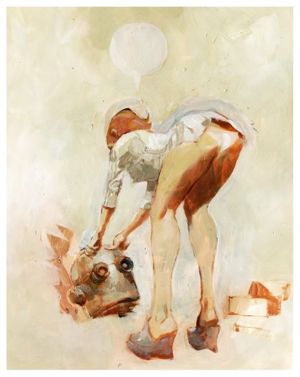 Ashley Wood is an internationally acclaimed, commercial illustrator, concept designer and comic book artist. He lives with his wife, soon to be three children and two cats in Australia. Ashley has been a professional illustrator for fifteen years and has worked for most major publishing and entertainment companies. Clients include: Dreamworks, Warner Bros, Sony, Konami, Vivendi International, Random House, Marvel Comics and Todd McFarlane Productions. Ashley’s work has appeared in books, movies, magazines, comics, television and video games. He is a three-time Spectrum Award winner and a two-time Communication Arts award winner. His art is published worldwide on a regular basis and he has contributed to both joint and solo fine art exhibitions. Art books include, Uno Fanta, Dos Fanta, Tres Fanta and the compilation work Grande Fanta. His Popbot editions are also available in several formats and multiple languages. Sideshow Toys, Medicom Toys have made toys based on Ashley's work.

These are toys designed by Ashley.

These are toys Ashley has lent his design skills to.

These are one-off pieces by Ashley.