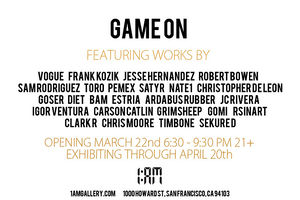 “GAME ON” is a group exhibition that featured new works inspired by the video game characters that molded us in our formative years through today. In this show visitors got to see a blend of designer vinyl custom toys and canvases that reboot the personalities and realities of classic video game icons (Mario, Zelda, QBert, Contra, Bowser, Mega Man, and more).