From Vinyl Creep
(Redirected from STCC)
Jump to: navigation, search 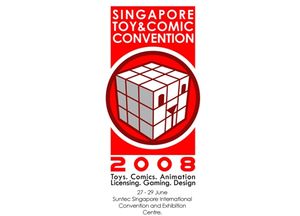 For far too long, Southeast Asian pop-culture fans have been denied a platform – made by fans, for fans – through which they could collectively celebrate their passion for toys, comics, animation, gaming, design and Cosplay. If you have been feeling an overbearing sense of emptiness because of this, we can tell you that 2008 will see a major turnaround. Having heard your cries for help, Play Imaginative Events, along with the Singapore Exhibition & Convention Bureau, A Group of the Singapore Tourism Board, have come to save the day!

Blasting off on 27 – 29 June 2008, the first-ever Singapore Toy & Comic Convention saw an annual onslaught of toys (general and designer), comics, animation, gaming, design, licensing and Cosplay on creative minds from all over the world, serving up an eye-popping visual feast and unprecedented variety and innovation in all the closely-related industries!

With the undeniable universal appeal of pop-culture, the Singapore Toy & Comic Convention will be a hot spot for a wide variety of exhibitors from all over the world, bringing the best that the East and West have to offer in one single, fun-filled event.