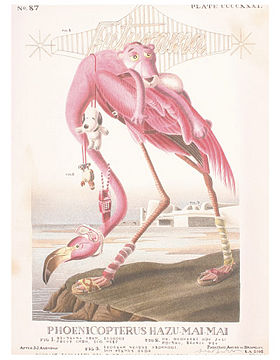 Andrew Brandou works as the artist Howdypardner, creating work based on inspiration from children’s books and LSD, Charles Manson, and opium dens. He is a graduate of Otis Parsons and lives and works in Los Angeles. While working for his bachelor’s degree at Otis Parsons, Andrew worked at the legendary Paper Moon Graphics card company. In the early 90’s he showed at galleries such as La Luz de Jesus and Zero 1. He continued to finance his personal work by working on a series of animation projects including The Simpsons, Rugrats, Duckman, and Spongebob. He was also an active illustrator for the recording industry, working for such artists as The Carpenters, Hole, and Tori Amos. Recently, he acted as an animator for “Realms of the Unreal” a documentary film about the life of artist Henry Darger. His work has been seen in the New Yorker, Nickelodeon Magazine, and he is featured in the current issue of Bark Magazine.