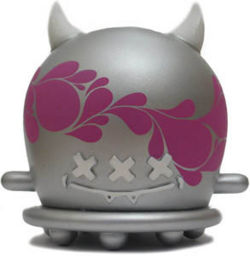 Hollywood-based artist Buff Monster teams up with MindStyle to bring to life his trademark pink and, er, uh...booby style in the form of intricately printed figures. Figures displayed very high Quality Control and had no articulating pieces.

With 8 original sculpts and 9 designs in Series 1, all were limited to 500 and each came with a numbered card. The "skull chase" was no more limited than any of the standard 8 designs. Buying a sealed case of 12 would guarantee all 9 figures plus 3 doubles.

Packaging came in the form of very strong cylindrical "boxes" with a pull off top that some would say are as beautiful as packaging comes!

The GID does not glow very well at all, with a lot of charging required for a very dull glow that fades rapidly.

SDCC 2007 saw the exclusive White Buff limited to 200 pieces. Completely white with a pink face and pink "BUFF MONSTER" on the back, this was based on the Double Boobie Head sculpt and sold out instantly.

Released Autumn 2007, a smaller mini series, dubbed "Flavorways", was released. Based on icecream flavours and standing 1.5" high, each contained within an ice-cream tub.

With 24 in a case, there were 8 "black on black" licorice sculpts that reflected the rawness of the first black 8" release, as well as 6 florescent chase figures of varying rarity. There were promised to be available in very limited numbers, with the next set of flavorways arriving early 2008.