It Came From Canada 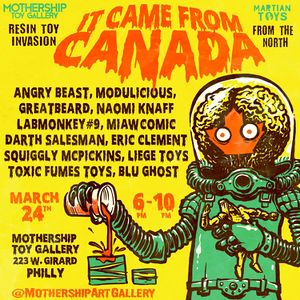 Alien invaders from our northern borders have come to turn us into toys! Using their mind control maple syrup and polite attitudes they’ve started their conquest in one of the founding colonies of the US, Philadelphia, and may already be in your home!!! An armada of alien themed Canadian DIY resin toys seems to be their method of takeover. Already spread through toy chests of children and basements of weirdo toy collectors and soon the world. Already on the second day of spring they’ve implemented their Canadian weather weapons bringing more snow than our little city has seen. All are convening upon the Mothership Gallery for the "IT CAME FROM CANADA - A DIY Resin Toy Invasion from the North!" group show!