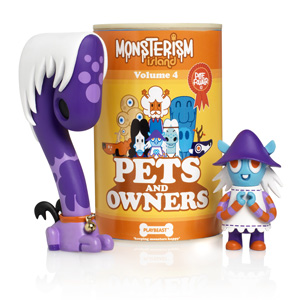 Series 4 in the Monsterism series focuses on the relationships between pets and their owners, and how the two often look alike. Each contained 2 figures, a pet and it's owner. The series were packaged in card tubes designed to look like tins of pet food.

Note: These are listed in the order they appear in the image below.