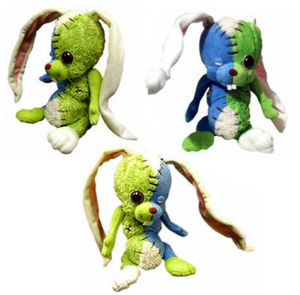 Harm first appeared as the cruel narrator of Alex Pardee's 2002 Calendar "Astrology Is Dead". Harm has a disease that forces him to only speak the absolute truth. Because of this super-truth-spewing power, Harm also has no friends. This is a sad sad fact. People don't like hearing the truth about themselves, nor the truth about their futures, whether it involves their perverted lust for 80's sitcoms, their overbearing low esteem problem, or even the extra fingers that are growing out of their backs that were always intended to be a secret. Throughout his life, Harm has unintentionally, but consistently made each and every one of his owners mad to the point of destruction, in which case they tear poor Harm apart, leaving him lying in a pile of his own tears, ripped fur and cotton stuffing. However, each and every time he gets ripped apart, he only vows to make himself stronger, literally pulling himself together, forging new body parts out of other discarded toys, and finding new homes in the arms of new victi...(ahem)...I mean, new "friends". After all, he just wants someone to like him for who he is, not for what he says... The multi-materialed plush bunny stands (or rather, slumps) at around 15", has posable legs and one (that's right, we like abnormal symmetry) posable ear.