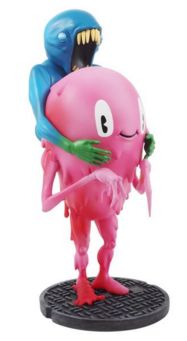 Alex Pardee’s unique style is one conceived through watching years of horror movies, writing graffiti, and listening to gangster rap. His work best represents that of avibrant undead circus sideshow. Final pieces are often brought to life by translating random shapes and colors into signs of torment and absurdity. By juxtaposing these two conflicting moods, Alex makes his works more personal to his viewers, forcing them to project their own feelings and emotions onto each character in his twisted universe.