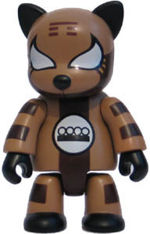 Qee, pronounced as ‘key’, is a registered design patent from Hong Kong and created by founder and President of Toy2r, Raymond Choy. Qee was introduced in 2002 causing hype amongst toy collectors worldwide, but soon after caught the attention and imagination of art lovers, graphic designers and the world’s youth alike. It has since then, taken the world by storm. Toy2r has eighteen Qee base characters to date and these mini figures stand 2.5" tall. They are used as a fashionable accessory (keychain), decor and/or designer/art toy collectable. They come in ‘blind’ boxes to conceal their identities to add excitement in the collecting process. So you never know what figure you will get and if you find that you have duplicates you could always work a trade. The eighteen base characters include:

All of our Qee figures are designed by renowned designers' and artists' from across the globe. They are available in various sizes that include the 1.5", 2.5”, 8”, 16”, 36” and the 60” Qee. In 2011 a new 5" "mini qee" was released in 7 different Qee characters. Toy2r also provides DIY Qees for aspiring designers' and artists' who wish to use Qee as a 3D canvas to express their own original work, as Qee allows for self-expression and creativity through a unique format.

Qee is a user-friendly product with a simple two-step process for assembling and disassembling your accessible Qee-chain. All you need to do is follow these simple steps:

1. Twist the head gently from side-to-side until the head detaches from the body.

2. Place the Qee-chain around the neck of the Qee and reattach the head to the body.

Join in the Qeevolution! Start collecting or D.I.Y today! 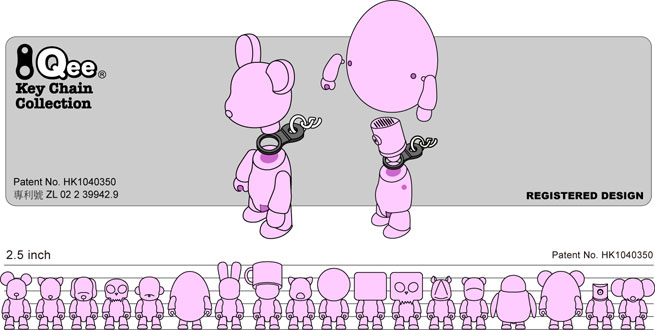 The shapes released so far include:

And there are few others specially made for various releases including Xbox and Starbucks. These are the most popular size for commercial promotional toys.

The 2.5" Qee platform has been an extremely popular platform for blind boxed and open boxed series by a huge number of different artists.

The new 5" mould was first seen in 2010 and then released as DIY figures in 2011. The shapes released so far include:

At NYC♥QEE in 2011 a new 7" Qee was first shown. This figure was made in ABS plastic, a new material for previously-vinyl Qee. They have improved arm articulation and the ABS makes special finishes much easier to manufacture. The only shape seen so far is the BearBearQ, in clear metallic and metallic silver. 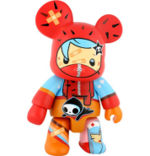 Although they began with only one or two moulds, they have now become as popular as the 2.5" figures with an increasing number of shapes! Available are: 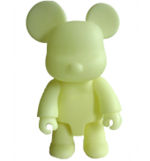 These giants are mostly only released as blank DIY projects. 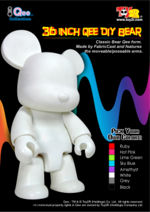 You thought 36" was a giant? Wait until you see one of these! So far again, only released as DIY and only available by contacting Toy2r direct.

Baby Qee's are a seated qee, with either angel wings or a devil's tail! They began as 3.5" figures, but now have also been released as 7" versions which are so far mostly as DIY. The shapes available are:

These are produced to promote up and coming Qee models.