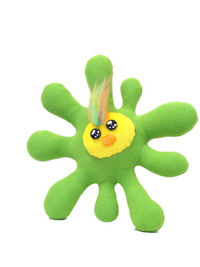 Born in Australia in 1973, Serena's facination with plush stemmed from the fact that she wasn't allowed to have pets as a child. She retaliated against her mother by collecting boxes of soft toys (plushies).

Serena went to art school in Melbourne and studied sculpture;she practiced welding and casting in bronze and plaster, but never studied sewing. She came away from her studies with a grounding in three-dimensional form; she's pretty sure none of her lecturers thought she was going to use their teachings on Caro and Moore to make little fluffy toys.

The first soft sculpture she made was featured in an exhibition of female artists responding to the word "Male". From there she went back to art school and participated in a couple of shows. One of them showcased all furry gynocological works, and then another was inspired by the Mexican Day of the Dead. Serena loved making the works, but hated trying to fit it to post-structuralist theory. After swearing to never make art again she decided to give the theory a miss, let the furries out of the White Cube and let them run free in Pop Culture land. They're happy with the decision, and she keeps giving Hal Foster another read...