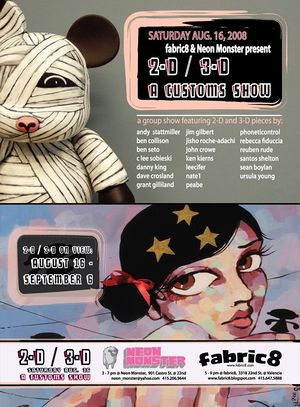 Fabric8 and Neon Monster both are working together to put on one heck of a show which will be taking place at two locations. Both locations will exhibit a different part of the show. Opening night will be on Saturday, August 16th, from 3-7 PM Neon Monster will start off with the festivities. Once you’ve had your fill you will be able to hop on over to Fabric8 where they will open the doors starting from 5-9 PM. 2-D/3-D is a group show which incorporates both 2 dimensional and 3 dimensional art works.