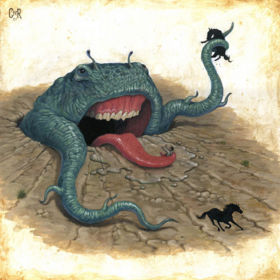 Chris Ryniak was born as a baby in 1976 in the suburbs of Detroit. He spent his childhood basking in the warm glow of Saturday morning cartoons and flipping over rocks in search of insects, reptiles and ghosts.

A graduate and former instructor of the Ringling School of Art and Design, He is now a painter and sculptor of all manner of critters. Chris' work has been exhibited in galleries throughout the US including Miami, LA, New York City as well as Hamburg,Germany. His paintings have also been published in numerous books and periodicals in the States as well as in Europe and Singapore.

Chris now resides in a coastal Ohio Dutch Colonial with his wife, two children, dog, cat and Venus Flytrap. Sadly, no ghosts as of yet.

These are solo shows from Chris.

These are toys designed by Chris.

These are toys Chris has lent his design skills to.

These are one-off pieces by Chris.